Skip to content
Igor Kotsiuba, CEO of Healthymity shared his insights on the situation with digital transformation in HealthCare sector

Igor Kotsiuba, CEO of Healthymity shared his insights on the situation with digital transformation in HealthCare sector.

The digital transformation in the Eurasian countries, which was proceeding at a high speed, as a result of the COVID-19 pandemic, has accelerated significantly. How to protect the region from the risks associated with too rapid digital transformation of the economy, society, government? These issues were discussed at the StrategEast Live session “Digital resilience in Eurasia”.

Anett Numa, Digital Transformation Adviser, E-estonia Briefing Center, spoke about the reasons for Estonia’s digital success. “We realized the importance of digitalization 26 years ago. In 1994, the government began to make the first digitalization decisions. Of course, since it was immediately after the restoration of independence, we did not have any resources. But we wanted people to have the opportunity to live in small towns and not have to leave for the capital.” According to Ms Numa, the COVID crisis has proved that Estonia’s digital transformation has been complete and successful. “I can say that for Estonia during the pandemic almost nothing has changed. Basically, we have kept doing business as usual. We were ready for this because we have gone through a complete digital transformation. Today Estonia sees how Ukraine and Georgia are facing the same challenges that Estonia did and we are ready for any cooperation with these countries,” continued Ms Numa.

Giorgi Iashvili, Co-Founder, CEO, Georgian Information Security Association, explained that after the Russian aggression in Georgia in 2008, they began to build their own cybersecurity system. “We invited our Estonian colleagues to make election infrastructure resilient. Georgian Ministry of Justice was being digitized with assistance from Estonia, Lithuania, the U.S. and UK.” As a result, today Georgia is the sixth most digitalized country in Europe and the ninth most digitalized country in the world, being among top ten countries for cybersecurity together with Estonia.’

Dmytro Lazuchenkov, Senior Manager, Advisory Department, Leader of IT Risks and Assurance Practice, EY Ukraine believes that the digital resilience of state-owned enterprises and institutions in Ukraine suffers from the fact that there is no “handover” from the previous government to the next one. With the change of government, management changes and with it all working programs are closed and new ones begin. This is a typical problem for Ukraine. “We have had a large number of incidents on the way to the digitalization of the state, with the implementation of such applications as Diia (Action) and others. As these applications are being developed by IT companies, a conflict of interest arises – IT companies are interested in introducing programs into the state as quickly as possible. But often these products are not secure enough, not only data leaks occur, but there are also “bugs” in such programs that leave an opportunity for corruption.”

Igor Kotsiuba, CEO, iSolutions LLC; Co-Founder, Healthymity sees the solution to the problems of Ukrainian digitalization in the creation of new safety standards that should be legally binding. “New regulations and new liability in the digital world are perceived badly, so politicians are reluctant to introduce them,” says Mr. Kotsyuba. At the same time, Igor emphasizes that this is a global, and not just a Ukrainian problem, there are no uniform definitions in the digital space yet, even about such concepts as a crime or a criminal. And there is a need for a global initiative to create a digital resilience system.

Answering the question by the panel moderator Anatoly Motkin, President, StrategEast on what roadmap for achieving digital resilience the Estonian authorities can recommend to countries that are just starting this path, Ms Numa answered: “It all starts with education. You can have perfect services, but very few percent will use them. Therefore, first – introduce computer classes in each school. Then teach everyone. The Estonian government paid for computer classes for senior citizens. As a result, 97 percent of retirees are now applying for their pension online. However, of course this is the responsibility of civil society. I must tell every young citizen – if your parents do not know how to use the Internet, then it is your responsibility to teach them.” 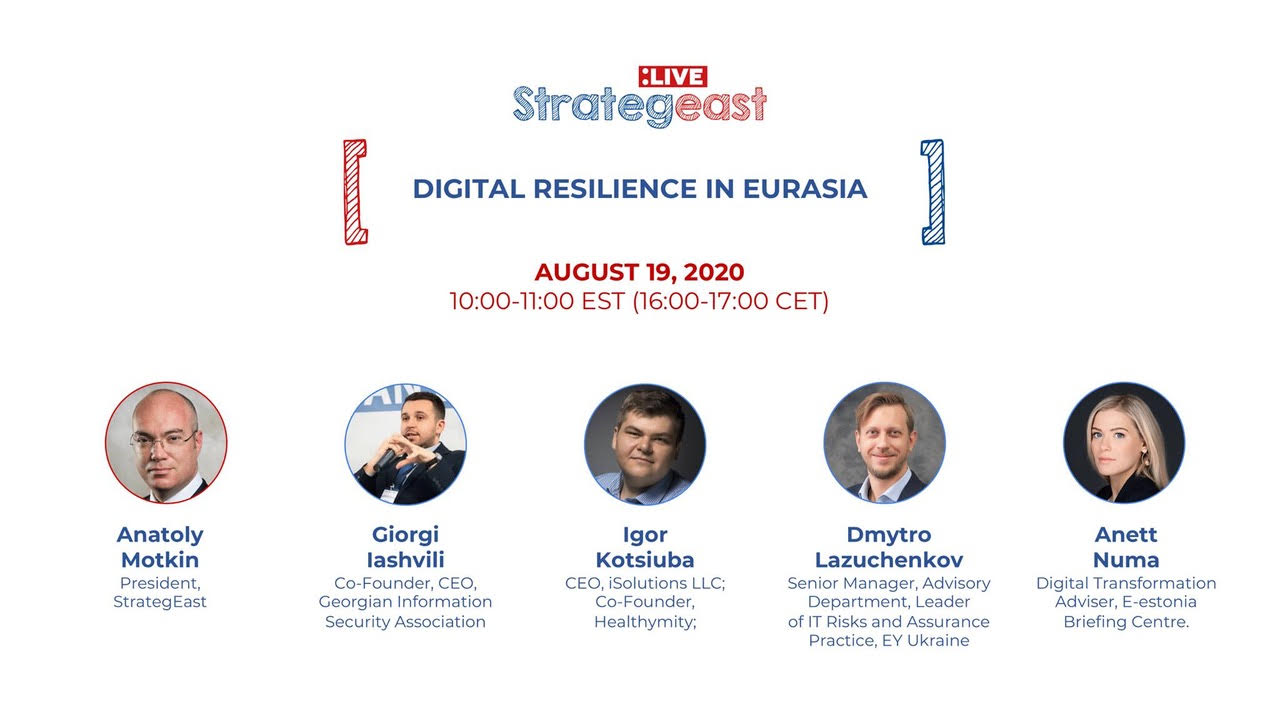